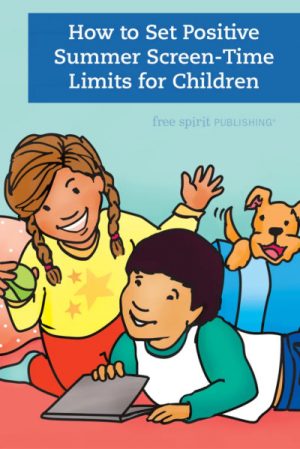 Confession: I’m writing this with three screens in front of me. The laptop I’m typing on, the phone I’m using for an interview, and the iPad playing an episode of The Office like white noise. (The fans blowing in the room aren’t blocking out household sounds, so the folks at Dunder Mifflin are helping do the job.) I suspect this will be a familiar scenario for many of you who are working from home. Screens are our routine.

And now our children have screen routines of their own.

Over the past year, many children relied on screens for learning and for staying in touch with family and friends. With so much time spent indoors avoiding crowds, kids also turned to screens for much of their entertainment, which increased the number of hours spent gaming and going online. Families now must adjust, figuring out summer screen rules for kids who’ve become more dependent on technology while also becoming more independent in their use of it.

How do you tell kids to cut down on their technology use? How can you do it convincingly if you’re in front of a screen yourself much of the day? It’s not easy.

My eight-year-old nephew and his parents are dealing with this problem. Lucas’s dad, Charles, discussed how he’s noticed that his son has spent so much of the past year on his iPad that he’s lost some of the social skills he was gaining at school and in team sports. “Now Lucas always talks about how everything is boring,” Charles told me. “The iPad kept his attention and now he wants it all the time. Lucas sets up two screens, one for his video game and one to FaceTime a friend playing the same game. It’s social, in a way. But maybe not the best way.”

Lucas’s mom, Erica, also faces the frustrations that come with their son’s gaming fascination. She said, “Lucas loves watching YouTube videos of gamers playing games while loudly commenting on every move!” Setting time limits on his video viewing leads to conflict, and sometimes she ends up just giving in after a long day of work. She’s learned that the best way to get Lucas to give up the screen is to have something planned to get him out of the house, like a game of tennis or a trip to the park. This is the point in the interview when Lucas himself chimed in: “She bribes me with Robux too!” (Robux are in-game currency for the game Roblox.) He then told his mom he’d give up the iPad for a week if she’d buy him two million Robux.

It helps to have a sense of humor about it all.

I’ve been writing about social and emotional learning (SEL) issues for years now, and I have a new set of books called Screen Time Is Not Forever, with a board book for toddlers and a more in-depth paperback for kids PreK-3. I wrote them for kids like Lucas, kids who love their tech but need limits so they still make time for friendships, fitness, and learning. (I’ll try to keep my sense of humor when Lucas tells me my new books are boring.)

As parents, we need lots of tools in our child-raising toolbox. As we help children move past the pandemic and find balance in their day-to-day activities, I think it’s important to keep our messages to kids positive, not punitive. Screen time isn’t “bad”—it’s a fundamental (and fun) part of modern life.

How can you present screen-time limits in a positive way?

Have a daily routine that focuses on play dates, exercise, outdoor time, and face-to-face interaction. Marieka Heinlen, the illustrator of Screen Time Is Not Forever, has stuck to the idea of keeping screen time to a minimum by setting a good example for her two kids. Marieka said, “I’ve always wanted my kids to spend a lot of their time outside with friends or doing creative activities with their hands. We really try to spend time as a family off screens, just having fun together. Now that my kids are older, setting this example—as much as possible—has paid off.”

You can check out the website healthychildren.org by the American Academy of Pediatrics (AAP) for a family media plan that suits the ages of your children. The site allows you to customize items that apply to your kids and how you want media to fit into their lives. Another option is to keep things simple by making a screen-time schedule for your child each day. 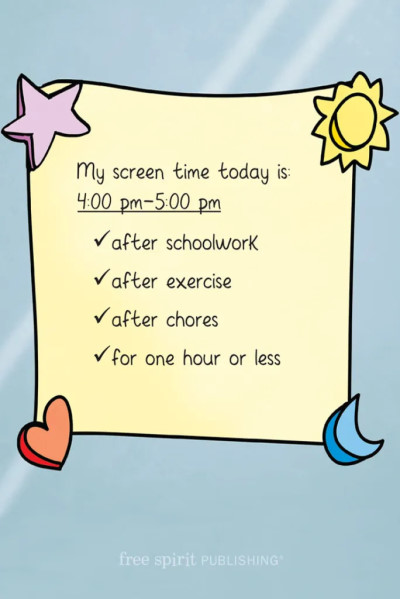 Put computers and televisions in a shared area of your home.

This way, you can monitor what your child sees on screens and be part of the experience too.

Experts suggest having tech-free zones throughout the home so children and adults have places where they know screens stay off. For example, maybe you decide no tech at the table during family meals, or you make a rule that children can’t have screens in their bedrooms.

Monitor your own screen use.

Check in with yourself to see how you use screens in front of your children. Do you text instead of play with your kids at the park? Are you on social media while your kids are in the room with you? Do you have the TV on in the background as you go about your day? We all do these things at times, so the goal is not to feel guilty. Instead, just ask yourself if there are behaviors you want to change.

Some days, you may need to let your child spend more time on a screen than you’d like, but that’s okay. Look for high-quality educational content, or seek recommendations from Common Sense Media, where you’ll find age-based suggestions for television, movies, games, and apps.

Remember, it’s okay for kids to be unplugged—and bored. That boredom can lead to creativity and innovation once children get used to going tech-free at certain times of day. Have a go-bag of items such as toys, books, stickers, art supplies, and sports equipment at the ready. Get outside together and have some fun.

And if all else fails, there’s always the Parental Controls feature.

Elizabeth Verdick has written children’s books for kids of all ages, from toddlers to teens. She has worked on many titles in the Laugh & Learn® series. Elizabeth loves helping kids through her work as a writer and an editor. She lives in Minnesota with her husband and their two (nearly grown) children, and she plays traffic cop for their many furry, four-footed friends.